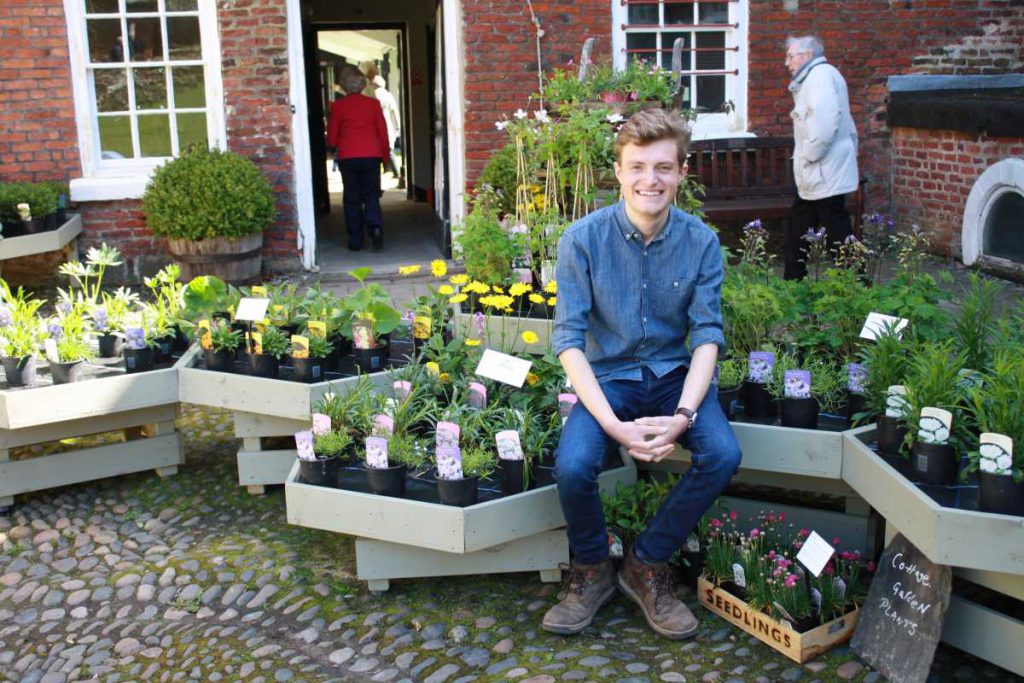 Greg Anderton may only be 22 years old, but already he is an old hand in the world of planting, with evidence of his work displayed across Lytham in glorious technicolour.

The week we meet, Greg Anderton is bubbling with excitement over the opening of his new plant centre the week before.

He has good reason to be cheerful; the Gardening Hub is already proving a hit with visitors. Along with this, he recently appeared on Britain in Bloom, where the Lytham in Bloom team won a gold in the Small Coastal Resort category of the North- West finals. Meanwhile, Leafy Lytham, his gardening design and planting business, is busier than ever:

“.. for the minute I’ve got quite a lot on!” he laughed, “It’s never been a chore though; it’s always been the thing that I’ve done to escape from the daily grind. It was my hobby, and when you’re doing your hobby all the time you never feel like you’re at work. To come down and put the plants out at night, it’s a really nice thing.

Greg cannot remember a time when he wasn’t involved in gardens:

“My story goes right back to being aged three, and the first picture record we have of me is in my grandparents’ garden with a watering can. I always enjoyed being outside, messing with the hosepipe and all those types of things. Then when I reached primary school I became a member of the gardening club. “

This early enthusiasm led to an invitation to have a plant stall at the school summer fair:

“I took it on, we took 40 pounds for the PTA, and that was my first day in business! I still have the picture at home.”

Then aged just 11, Greg continued selling plants to family and friends, mostly to fund his own gardening projects:

“I started doing hanging baskets for the teachers at the school. I used to do little trays of bedding plants and things. They could order them through a catalogue which they used to send out through the staff briefing, and I’d deliver them to their offices. We did Mother’s Day planters, all sorts.”

By the time he reached the sixth form, demand for the baskets was booming, and Greg became involved in transforming parts of the school grounds, including the creation of a memorial garden which he still maintains to this day.

After school, Greg went on to Edge Hill University, where he studied a business degree. At first, he tried to sell baskets to the university staff, but realised quickly that the logistics were a problem.

Nothing daunted, Greg had spotted a patch of flower beds back in Lytham ripe for re- designing, and approached the sponsor, Marc’s Garage:

“I did them, and Lytham in Bloom saw the work I’d done. I was approached by them to do some window boxes and hanging baskets for the shops in Lytham, and that was when the bespoke display service was born. Four years after that happened, we now look after about 25 commercial properties.”

The voluntary work with Lytham in Bloom not only led to customers for his planters, but people started to ask Greg to design their gardens as well:

“I did my first one in 2015, and the year after I was approached for the Lytham Festival hub, in the middle of the town.”

With help from Lytham in Bloom, the festival hub was a stunning success, and was part of the projects featured on Britain in Bloom’s Lytham episode:

“They didn’t really say we couldn’t talk about it, but we kept quiet because if for any reason it didn’t go out we didn’t want to be disappointed! I met Chris Bavin and all the different producers.”

The garden design business is a relatively new part of Leafy Lytham, but again one which is expanding by word of mouth. Currently, Greg only has capacity for five gardens a year, but has already had many more enquiries.

He hopes to use the Garden Hub to assist customers who may have missed out on securing him to design their garden:

“My idea with the Hub is to let people be able to design their own garden, with what we’ve got. We group things in different areas; down there at the bottom is all cottage garden plants, then this bench in front is for a woodland or shady garden; people who want a smart patio go to those benches over there. There’s an area with all the coastal things, which do really well in a south facing, hot sandy soil “

Five percent of sales go directly to Lytham Hall, with the team on hand to give out gardening advice.  Greg loves talking to people about their gardens:

“I’d say it’s my favourite part of the job; working with people to realise the dream of a lovely garden because it is an achievable thing with a little bit of knowledge and the right plants”

The week we meet, he is preparing for one of his busiest times of year:

“Next week we start what we call the summer collection, which is when we do the seasonal planting. We’ll literally dress most of the businesses in Lytham High St, as well as for private houses. So that’s what’s coming up, and it’s the most critical time. We’ve got eight weeks to beautify the High Street!”

Greg clearly loves what he does, and hopes to inspire others to follow suit:

“I’d like to encourage other young people into business, because you learn so much through actually doing it, and you never know everything, you’re always learning new skills. Now I’m an employer, which for a 22 year is quite full on really! But I’ve got an amazing team of support around me. I’m just so grateful for all the time and effort people have put in to help me achieve what I have; I haven’t done it on my own by any stretch of the imagination. I invited a lot of those people down to the launch of the Hub; it’s only happened because they have helped and supported me”