Kilgrimol, Lost Beneath the Sands 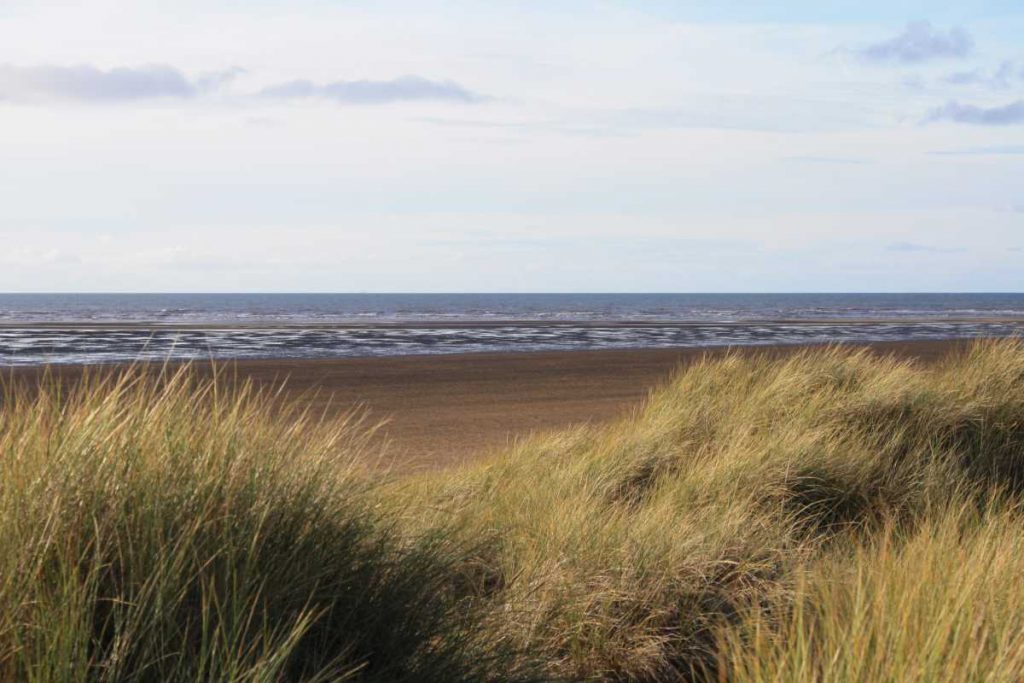 The ravages of the sand and sea need no introduction to those who live on these western coasts. Blowing sands have been a fact of life here since well before the major towns were built. The sea has claimed land and lives over the centuries, and all who live by the coast know to respect it.

Legend has it that these sands hide an ancient settlement, that of Kilgrimol, lost forever beneath the sea and marsh.

Legend also holds that, on the eve of the Winter Solstice, the monks can be heard chanting vespers. Or if that doesn’t give you chills, how about the ghostly tolling of a ship’s bell on stormy nights?

Before I came across this tale, the name Kilgrimol basically meant the name on the front of a bus! The bus leads up to Kilgrimol Gardens, a small estate at the end of St Annes . The edge of the golf links and into the dunes is thought to be the rough location of the old settlement, with its church and burial ground further towards the sea. Locals and shipwrecked sailors alike were allegedly buried here, and ‘the settlement’ of Kilgrimol may have been nothing more than a simple graveyard and hut for the priest

The Meaning of Kilgrimol

Nick Moore suggests that Kilgrimol may have been an early trading site on a sandbank, or it may have been a simple church.  That it was an early Viking/Christian church is suggested by the Norse name. The name keeill meant a church, originally made from the keel of an upturned boat, with the Grim part meaning ‘belonging to Grim’ ie a person called Grim.

The Legend of Oswald the Gentle

“The Legend of the Lost Brother” was chronicled by William Canton, a journalist and poet who wrote “A Child’s Book of Saints “ back in 1898.

Where the legend came from nobody knows. It’s adorable however, if a little Victorian! It starts thus:

‘This is the story written in the chronicle of the Priory of Kilgrimol, which is in Amounderness. It tells of the ancient years before that great inroad of the sea which broke down the high firs of the western forest of Amounderness and left behind it those tracts of sand and shingle that are now called the Blowing Sands. In those days Oswald the Gentle was Prior of Kilgrimol, and he beheld the great inroad of the sea; and afterwards he lived through the suffering and sorrow of the great plague of which people now speak as the Black Death.’

Oswald the Gentle, by the way, was a character straight out of a fairy tale. He was a great friend to all animals, no matter how big or small, and a mentor to the younger monks. St Francis of Assissi springs to mind, but he is actually covered in the same book.

The tale goes on to tell of a stormy night when the monks woke up to a terrible wailing noise and the crashing and smells of the sea all around. Outside, the space within the Priory walls was crowded with wild creatures of the forest of every shape and size, including a huge grey wolf. Oswald settled everyone in, then climbed up a mound which overlooked the forest. He saw that the sea had flooded inland for miles, taking down all the trees in its path. The Priory had been in a position of safety, but the forest was destroyed. For days after, the trees mouldered in a salt swamp, until the sand blew over and covered it all. After that, the people in the area forgot there had ever been a forest there and called that part of the coast the Field-Lands.

There was no mention of what happened to all the forest creatures!

Richard Fitzroger and the Gift to the Priory

Whatever its form or origins, Kilgrimol was included on old boundary maps. Richard Fitz Roger owned the lands of Lytham back in the 12th century, and in 1190 gifted part of his lands to Durham Priory. His charter defined the edge of the border as:

‘the ditch on the western side of the burial yard of Kilgrimol, above which I have erected a cross, westward unto the sea”

It was also cited in later boundary disputes with the Priory and the Butler family of Layton. After the Battle of Mad Nook in 1530, Kilgrimol was mentioned as having been lost to the sea, and a new map was drawn up.

This is not the first story of lost lands taken by the sea, but it is also true that the coast was once thickly forested and unrecognisable as the land we see today. Next time you drive back through the dunes on a wild winter’s night, listen out for the toll of the bells! And watch out for that grey wolf.